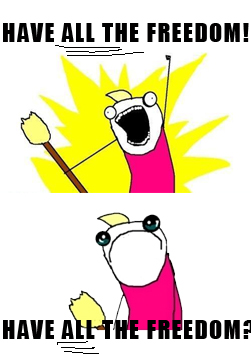 One of the best parts about being a freelance writer is the freedom that comes with having no set work schedule or office. Or, at least, that’s supposed to be one of the perks of freelancing. The reality, though, is quite different. In fact, it’s just the opposite. Freelance writers actually have less freedom than their office counterparts in many ways and it’s precisely because of all the freedom that they have.

In A Perfect World…

The typical perception of freelance writing sounds pretty awesome. You can work anytime you want! You can set your own hours! You can even write anywhere you want!!

On paper, it’s a pretty good deal. For one, you get to make money writing, which is a much better deal than some of the alternatives. Second, the idea of flexibility is tantalizingly attractive, particularly to people with kids and busy family lives. Freelance writing has been a godsend to many stay-at-home moms; it’s no surprise that the freelance writing world is 80 percent female.

The problem with anything limitless is that it never expires. If you had unlimited money, that would be a great thing. But if you think about the basic premise of freelance writing, it basically says that the more you work, the more you make, and therefore you should work more so that you’ll make more.

Again, it sounds great on the surface. That’s before you realize that most freelance writers can’t do something as simple as watch a TV show without checking their phones or freaking out at the potential earnings they’re missing out on. In the mind of a serious freelance writer, every night out, every trip out with the kids, even every bathroom break is money lost.

Worse yet, the workflow of freelancing tends to be boom or bust. That means that you’ll have periods of nonstop work that are followed by days where there’s nothing to do. Those quiet days get real old, real fast.

Picture this scenario. You kill yourself to get a massive amount of work done in a very short period of time. You’ve earned a break, right? Wrong! Because now, you have all of this down time where you have nothing to do except worry about where all the jobs are and why nobody has contacted you. Did I offend my favorite client? Am I good enough to do this job? It gets very easy to second guess yourself, even if you completed a great piece just a day earlier.

The Rules of Disengagement

The bad news is, there’s no easy cure to what ails most freelancers. It’s just the way we’re wired. It’s great to have a solid work ethic. It’s not so great when that mind of yours doesn’t ever seem to want to turn off.

One of the main problems in today’s society is that we have too much access to everything. We worry about things like clients and work because we have the means to do so. The more you can remove the temptation to fret about these lost opportunities, the happier you’ll be, and the more confidence you’ll have in your abilities.

So, when you’re done working, put away your computer and turn off your phone, even if just for a little while. Don’t tempt yourself to worry about scenarios that may not exist. You might miss a little something while you’re off the grid, but that’s a far better scenario than missing out on life because you’re consumed with work.

You may be called a freelance writer, but you’re only truly free if you allow yourself to be. By all means, go above and beyond for your clients, and do what you can to build your business. But don’t forget to unplug yourself from the rest of the world every once in a while. It takes a little practice and your clients might not love you not being available 24/7, but it’s essential to your mental health. And in the end, it’ll make you an even better writer.

Bryan B is a freelancer writer living in Long Island, N.Y. He may be the only writer in the entire world that doesn’t drink coffee.

Try This Clever Content Scoring System to Find the Winning Topics
What to Track When Evaluating Content Performance
What to Track When Evaluating Content Performance
Agency Hack 3 of 5: Get the Timesavers in Place, like Wizards and Builders
How to Create Content that’s Distribution-Ready for Multiple Channels
Get tips, tricks, tactics, and advice in your inbox each week
Join our FREE on-demand content strategy masterclass