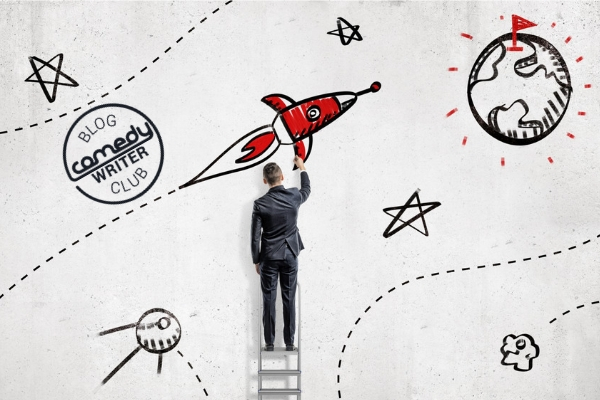 Words are symbols meant to communicate ideas. And they’re clunky as hell because they take you a step away from the real thing. That’s pretty annoying, but it’s why we place such a premium on style and emotive quality in writing and speech.

The best way to get the most juice out of the words you choose is to communicate in terms that relate directly to the senses. Relating things to the taste of a well-known type of food or a common smell is a great way to bring the senses into your message and plop your audience down right into the middle of your meaning.

“A Picture Is Word a Thousand Bucks”

Comedians do this handily, at least the ones that are worth listening to. That’s because good humor depends on establishing a direct visual humor connection to a whole web of common knowns and relating them to an exaggerated or absurd idea. Good comedy plays on cultural norms, flirting with violating those norms. Where the joy comes into play is in the immediate visceral knowledge that members of the audience have a common understanding of complex social issues. From there, laughter, a sense of ease and belonging flows.

Case in point: Demetri Martin is a popular comedian who uses common ideas to establish a connection between his ideas and the audience. Some of his most popular jokes include subjects such as:

What all these examples have in common is they are much funnier when Demetri Martin talks about them and that they all relate to something that everyone has experience with — with the possible exception of herpes.

Step one is as easy as making small talk and saying something relatable. We do this in everyday small talk. Some people do it better than others, and the rest of us need to practice.

In step two, you might tell a brief story about the common relatable theme that you’ve come up with. This sort of thing is generally referred to is as “breaking the ice” for a good reason. You’re diffusing your audience’s natural inclination to resist whatever it is that you trying to push on them. You see; deep down, people know they can be tricked. They know that no matter how much sense you appear to be making — you could be pulling the wool over their eyes.

Many people are willing to risk passing up a good deal just to avoid even appearing naive. This is the nature of the ice that needs so much breaking, so often.

The sooner you’re able to establish common ground in the least threatening way possible — the sooner you’ll be ready to make the big sell.

Paint them a picture, a humorous and relatable picture that gets them into right-brained thinking. Be sure to show that you are enjoying the imagined topic as much as they are. This places you together on non-threatening terrain, the terrain where impressions are more important than facts and figures. Once you’re there, better sales are just right around the bend. And remember: Glitter is the herpes of craft supplies.