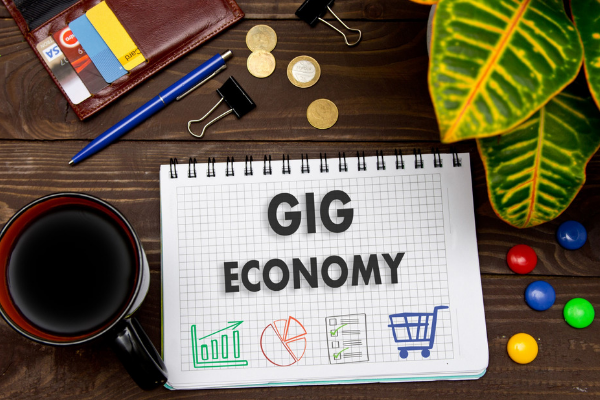 Like the Force in Star Wars, gigs are what binds and holds the economy together.

Okay, maybe that’s a bit overkill, but the gig economy is a powerful force. Just how powerful, nobody really knows, but several have speculated just how many workers #freelance. In fact, even the US Government has difficulty putting a finger on just how many people work in the gig economy. And yet, when you look at the numbers in the news and in statistics, you can’t help but wonder if the gig economy will surpass the trend of the traditional job.

The Government is Clueless about Gig Workers

The first question might be: just how many freelancers are out there? You might think that the US Government would have a handle on just how many freelancers there are, but apparently that’s not the case. According to MarketWatch, the Bureau of Labor Statistics (BLS) doesn’t have a way to track freelance workers. The latest tracking the Bureau of Labor Statistics did on “contingent workers ” was a survey published in 2018 which deals with workers who work less than a year, worked for temp companies, or salaried employees that didn’t expect their job to last the year. This survey found that a mere 5.9 million workers or 3.8 percent of all labor are contingent workers. This was a simple survey in May 2017 and has a lot of problems with it. For one thing, there’s no set definition on what a gig worker is. The definition of contingent workers doesn’t account for freelancers who do this full-time, freelancers who take gigs on the side, or regular workers who take side jobs to make ends meet.  If you’re surveying people who work in regular employment or who work for companies full-time as contractors, with or without a temp agency, that’s one thing. If you’re talking about the dude who just wrote an article for you freelance, who drove your Uber car, or who walked your dog for cash, that’s something else. These people are harder to track, and yet other surveys and polls suggest that freelancers are a major for in our economy, accounting for about 36 percent of the work or about 57 million gig workers.

Yep, you read right. 57 million gig workers, or more that 36 percent of the US economy. Those numbers aren’t mine — you can thank Forbes and the Gallup Polls for that. Another study by the Freelancer’s Union found almost the exact same numbers of freelancers, making 57 million gig workers more likely than the 5.9 million contingent workers. In fact, that’s the sole problem with the BLS numbers: they take into account the contingent workers but not the freelance workers. Gallup differentiated between the two, and added both to the mix to get their final number of gig workers. So, they estimate that about 36 percent of workers work gigs.

One Third of the Labor Force Has Found a Better Way

I don’t know about you, but I grew up during a time when you went to work for a company in a “normal” 8 to 5 job. Your career depended on what your bosses thought of you and how popular you were. Good workers were supposed to be promoted, but that wasn’t always the case. And companies demanded loyalty, or at least lip service. Now, I’m not slamming corporate jobs — who am I kidding, of course I am! — but freelancing has given me and others like me the flexibility to work my own hours and choose my own work. And I’m not the only one, apparently, given the statistics. The gig economy has helped others make more money in tough times and given those of us who don’t want to live in big cities the ability to choose where we work. And the popularity of gig work is catching on. More and more people are taking gigs to supplement their pay or to give them the freedom to work the hours they want to and live where they want to. And they’re providing a service to companies who can’t afford to hire the extra labor.

The Future of Gig Workers

According to CNBC, it’s predicted that by 2027, there will be more contract workers than permanent employees. These gig workers are currently being used by the big Fortune 500 companies for noncore work, that is, work that isn’t directly making them money, so gig workers have already entered the mainstream workforce. What’s more, gig workers are causing an increase in fully remote companies. Entrepreneurs have discovered that they can get good talent not only in their area but across the globe — and they should use remote workers instead of insisting their employees move to where the corporation is. What you’re likely to see as more people opt for the gig economy, you’ll see more networking and more interaction between contractors, even if they aren’t working the same gigs. This networking will, in turn, influence businesses directly. Good corporations who offer good pay and treat their freelancers well will get better gig workers than those who don’t.

If you’d like to learn more about the gig economy, check out Writer Access’s Gig Economy Blog.

Maggie B. is a professional, multiple award-winning writer and editor of more than 30 books and more than a thousand articles. She earned her Master’s Degree in Liberal Studies with an emphasis in creative writing at the University of Denver. She has written articles on science, pets, sustainability, hunting, technology, outdoors and recreation, food, writing, publishing, careers, and other topics. She is the publisher for Sky Warrior Books and Garnet Mountain Press.