Skip to content
Morgan G
Writer #61165
Joined 2/6/2022
HIRE ME
5 Star Rating
1,579 Projects
0 Endorsements
0 Elite Skills
Morgan G. is a career storyteller and writer, beginning with his work as a full-time reporter at several newspapers in California, including a stint at the Los Angeles Times. There, he initially covered the Olympic Arts festival, writing colorfully and informatively about all the arts -- film but also theater, music, and fine art. He evolved into that paperâ€™s top reporter on the TV beat. He also edited and published an energy conservation newsletter for the City of Davis, CA, and wrote a similarly themed monthly column for Popular Science Magazine.

Morgan G. migrated his research and article-writing skill to Hollywood and a 30-year career as a TV writer-producer, winning the Hugo Award for science fiction writing (for the famed "INNER LIGHT" episode of STAR TREK: THE NEXT GENERATION). In his ongoing career, Morgan has written or produced 250 episodes of TV for LAW & ORDER, THE 100 and many more.

Currently, he leans further into hard science, crafting talks and articles on pop-culture science and technology topics and writing or co-writing several grant proposals submitted to NASA. For the 2022 NASA Innovative Advanced Concepts grant entry he submitted, Morgan G. was Principal Investigator, aided by Co-Investigators from NASA Langley Research Center, Honeybee Robotics of California, and the University of South Florida. He has written and/or edited white papers on this and other topics.
Entertainment
Energy
Science
Article
Grant
Script/Video
Technical Writer
Journalist
General Writer

Morgan G. specializes in writing inventively about technical products or processes, especially in the areas of space travel, energy policy, the environment, the human brain, and deployable habitat construction. His writing experience encompasses articles, white papers, grant proposals, scripts, and product descriptions.
After writing a television pilot about downloadable memories, he developed a popular TedX-style talk about the hard science underlying the connectome, the map of the human brain. He has also spoken at colleges and sci-fi conventions about the likelihood of discovering sentient life on other planets.

He is currently experimenting with writing for the Virtual Reality realm, developing a project built around the opportunities for an empathy experience presented by Oculus goggles.

Morgan G. has a patent on the energy-efficient shelter concept called "Habolith" (a habitat or shelter composed primarily of regolith, aka sand) and is an advocate for deployable housing for the homeless and for displaced political and environmental refugees, who number 85 million worldwide. Much of Morgan G.'s grant-writing experience has been in service of the advancement of this design.

He reads every article he can find about Artificial Intelligence (AI), space colonization, quantum mechanics, and alternative energy sources, particularly hydrogen fuel cells. For pure pleasure reading, he currently is focused on the classics and historical fiction, the underpinnings of human nature being essential for all storytelling.

Morgan G. is also an amateur musician and composer, though that is pursued solely with headphones on. (You're welcome, Mrs. G.!) Long, long ago and far away, in a pre-Covid world, he played a fair amount of tennis. He walks an average of 25 miles per week. 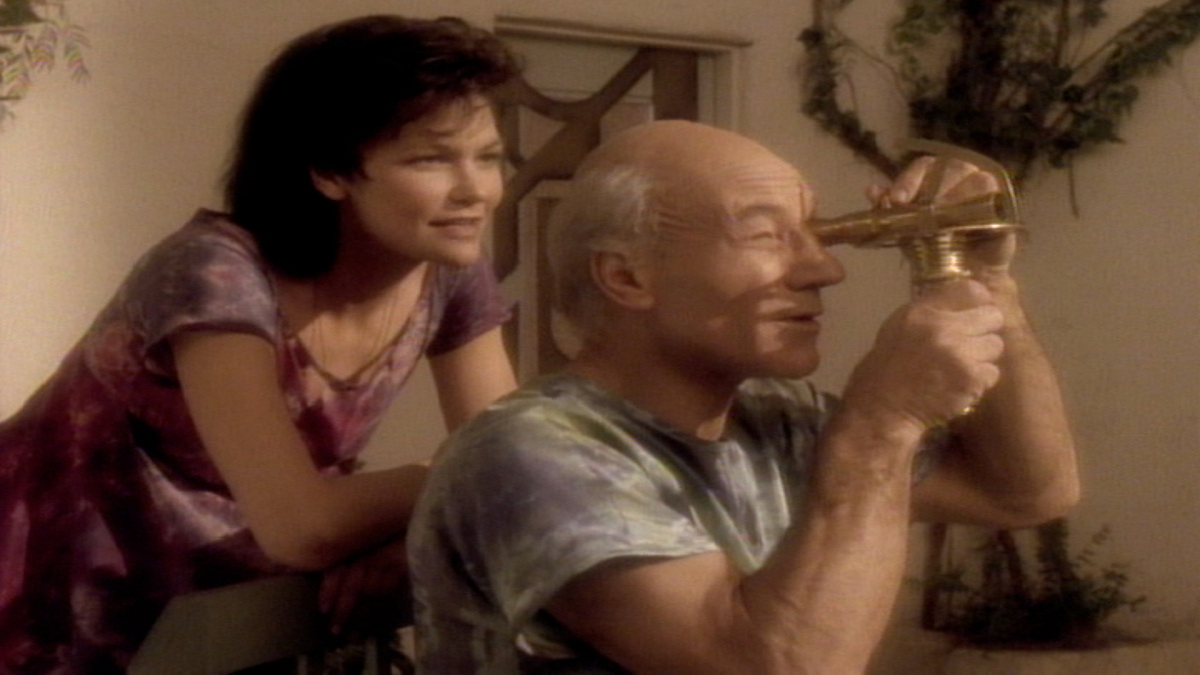 Star Trek: The Next Generation Season 5 Episode 25: The Inner Light on Paramount Plus

This thought piece by Morgan G. homed in on the inadvertent dangers presented by the milit...
Entertainment
Article
General Writer Morgan is the rare writer with a trifecta of experiences in the entertainment industry -- as an observer, an insider, and a content provider. Prior to joining the Writers Guild of America as a full-time, working screenwriter, Morgan covered Hollywood as a reporter, first for the L.A. Daily News, then as a staff writer for the Los Angeles Times. He initially joined the Times as lead reporter covering the Olympic Arts Festival â€“ the cultural portion of the L.A. Olympics. In this position, he wrote dozens of articles on all facets of the performing arts world â€“ film, but also dance, music and theater. His highly read coverage gave readers a peek behind the curtains of live performances and the artists involved, as well as a dissection of the logistics of mounting and financing their efforts.

He segued into reporting on television for the Times, establishing the template for critical and populist examination of TV on par with the newspaperâ€™s longtime coverage of Film. His next job was as Director of Current Drama for NBC, working with writers and producers of on-air TV series to make sure they reached the maximum number (and type) of eyeballs.

As a writer-producer, he has written and/or produced 250 episodes of broadcast and cable TV series. Many of these were completed in tandem with his role as Showrunner â€“ the lead writer and visionary on an ongoing series. Morgan's Emmy and Writers Guild of America nominations (for LAW & ORDER) and Hugo Award (for STAR TREK: THE NEXT GENERATION) attest to his creative writing and producing abilities.

Morgan writes knowledgably about all aspects of creation and consumption of entertainment content.

Morgan has long been an advocate of energy conservation. The City of Davis, CA, hired him to edit and publish a quarterly energy conservation newsletter given free of charge to every resident. It combined Q&As, articles, interviews, and cartoons designed to nudge discussion of conservation technology and benefits into the mainstream. In a city whose political elite were in the vanguard of energy issues â€“ re-shaping building codes in the 1970s to encourage residential solar heating and passive cooling; early adoption of bank ATMs for pedestrians years before their ubiquity â€“ Under the Sun, as the newsletter was titled, helped make energy a populist topic.

A short time later, Morgan was hired by Popular Science Magazine to write an energy conservation column. It had the same goals as Under the Sun, reaching a much larger audience.

Energy usage is at the forefront of Morganâ€™s grant-writing for NASA programs. Everything we humans do on the Moon or Mars will involve an energy trade consideration: is it more efficient to bring materials and gear from Earth (with a high energy cost for transportation), or to make things with in situ resources (high energy cost for mining/collection of materials followed by manufacture)? Morgan is well-versed in these considerations.

Morganâ€™s writing for the science industry includes several talks he has given on two specific topics. His talk on the human connectome, inspired by the plot of â€œThe Inner Light,â€ deals with the functioning of the human brain and how it might be manipulated in the near future to mitigate personality disorders or enhance learning. (Think Keanu Reeves saying "I know kung-fu"!)

Regarding planetary shelters, an area of particular expertise, he has spoken at consortiums and conferences regarding the viability of structures built from in situ regolith (soil), and how the principles of granular jamming allow for the reduction of Earth-origin materials and machines for shelter construction.

In both cases, Morgan personally researched and wrote the talks. He also interviewed top scientists and authors in his growing network.

At the Daily News of Los Angeles, he covered that city's local industry: show business. Later, at the Los Angeles Times, he established the paper's template for coverage of the Television industry on par with its longtime writing about Film and Cinema. Among his many articles for that paper were think pieces about the future of the TV industry, the push-and-pull between networks and advertisers, and the status and stature of the leading purveyors of news and entertainment.

Morgan G. interviewed a long list of luminaries and celebrities including Steven Spielberg, Sean Connery, Don Johnson, Jacqueline Bisset, and the heads of all the major TV networks, always with an eye toward their impact on the entertainment business.

Morgan G. perfected his grant-writing skills while working with various NASA and ex-NASA scientists and academics on a planetary surface habitat he co-conceived. He has submitted twice to the NASA Innovative Advanced Concepts grant, both times being invited to move from Step One (open call) to Step Two (by invitation).

Additionally, he was included in a grant submission for NASA's Virtual Institute for Space Studies, on which he contributed technological ideas for the habitat sub-systems as well as overall editing of the final grant document. This grant, in particular, demonstrated a flair for science-meets-storytelling: Morgan conceived of the label "synthetic organism" for the transformable space habitat proposed by the group. This was an ear-catching and much-lauded moniker for a personnel shelter that adapts its volume and shape to the crew size and function at any given time, and also self-heals.

In both of the above cases, neither grasp of scientific principles nor general writing experience would have sufficed; rather, it is the combination of storytelling flair and scientific comprehension that has made Morgan a sought-after contributor to, and editor of, scientific grants.

Morgan G. has written 75 scripts and re-written (un-credited) another 50, all in the form of teleplays for network and cable dramatic series.

When Morgan G. lectures about screenwriting, he speaks of "6 Boxes to Check": six specific structural and attitudinal elements that are mandatory for a successful screenplay. He conceived of these over years of writing for TV and they now have helped dozens of students find jobs in the Entertainment Industry.

Morgan G. has applied his "6 Boxes to Check" template to branding and explainer videos, industrials, book trailers and decks used to complement TedX-style talks. His long service to Sony TV as a Showrunner, plus his Emmy and Writers Guild of America nominations (for LAW & ORDER) and Hugo Award (for STAR TREK: THE NEXT GENERATION) are evidence of his script/video credentials.