The Mars and Venus Debate: Can Writers Produce Engaging Content for the Opposite Sex? 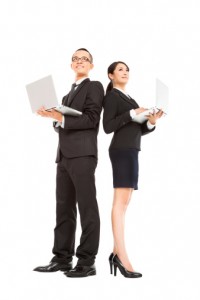 In one of my favorite episodes of Mad Men, the cocky gang at Sterling Cooper directs secretary Peggy Olsen to write copy for the flailing Belle Joile lipstick brand. The all-male creative team was stymied about how to reach the fairer sex, and much to their chagrin, Peggy’s “fresh approach” proved tantalizing to Belle Joile’s execs.

Obviously, this is an overly generalized scenario used to move the show’s plot along. But is there some rationale behind, as the ad agency’s copywriter Freddy Rumsen so eloquently put it, “throwing it to the chickens?” That is—in much less misogynistic terms—should gender impact your decision when hiring content writers?

You may assume it does. After all, novelists of both genders are often criticized for not writing realistic characters of the opposite sex. But developing a believable character and writing the associated dialog is a much different skill set than writing digital content for mass consumption.

Without getting a soapbox about gender equality, professional male and female content writers should be able to write for the opposite sex without resorting to overt stereotypes, tired cliches or hyperbolic innuendo.

If the idea that only men could write for a male audience and vice versa was utilized in the content writing world, a kids’ clothing company would always hire a female writer to craft content for the mommy market and a lawn equipment business would only use male writers for blog posts related to yard maintenance. This approach would essentially eliminate half of the talent pool before you ever got started.

So what’s the key for marketing companies who need to hire content writers that appeal to a highly specific audience? Find writers with specialized knowledge of a niche market.

Writers who “write what they know” will consistently produce a higher quality product than those who must first seek to understand a topic. For example, if your SEO firm needs to find a writer to provide content for a pediatrician’s practice, don’t assume you must hire a female writer.

Yes, a woman is usually responsible for her family’s healthcare decisions, but that doesn’t necessarily mean she’s well-versed in pediatric medicine. A male writer may have much more knowledge of immunization schedules, child development milestones and common childhood illnesses. Chances are good he could craft much more engaging, useful content than the woman who’s simply visited a pediatrician’s office when her child needed a checkup or had a runny nose.

So don’t feel hemmed in by traditional gender roles when hiring content writers. You’ll find you get a better overall product that gets shared socially by using writers who write intelligently and authoritatively about your clients’ unique markets.

Chelsea A is a freelance writer available on WriterAccess, a marketplace where clients and expert writers connect for assignments.