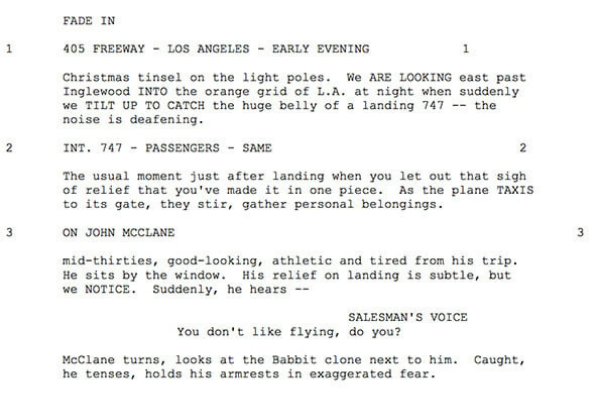 If you had to make a list of some of the most brilliant pieces of writing of the 20th century, Jeb Stuart and Steven E. DeSouza’s script to “Die Hard” would be on it.

“Die Hard” quickly became one of the most successful movies ever for a lot of reasons. A big part of it came down to the charisma of Bruce Willis. Who doesn’t love Alan Rickman as Hans Gruber, one of the best villains in cinema history? The action, the effects, the spectacle, it’s all there…

… and none of it would have made a difference if the writing weren’t so strong.

For the record, here is a copy of the production draft of the script itself. Even at just a quick glance, it’s clear that all writers – even those operating exclusively in the technical space – can learn a lot about the types of things we should be thinking about the next time we sit down in front of that blank page on our computer screens.

The Art of Setups and Payoffs

Even if you’re not writing fiction, one of the most important lessons to take away from the “Die Hard” screenplay involves the effortless setup and payoff of certain key ideas or events.

One of the most memorable scenes in the finished movie is when a barefoot John McClane has to run across broken glass to flee Hans Gruber and his henchmen. It’s a major turning point in the film, as up until now things have been difficult for McClane – but not impossible. He’d used his skill and his cunning to overcome most of the obstacles that were thrown at him up to this point, but now he’s suffered a major setback that dramatically shifts his point of view on how easy it will be to get out of Nakatomi Plaza… if he’s able to get out at all.

The only thing more satisfying than the scene itself is the fact that Jeb Stuart and Steven E. DeSouza somehow manage to set up this pivotal moment on page two.

In the opening scene of the film, John has a discussion with a salesman on a plane who recommends taking off his shoes and making “fists with your toes” to overcome jet lag. What started as a seemingly innocent conversation laid the groundwork for something that doesn’t properly pay off for an hour and a half.

But without that setup, cleverly hidden inside what at first appears to be a pretty random conversation on an airplane, the moment doesn’t work at all.

As writers, the lesson we should take away from this is simple: it’s never too early to start setting up the big ideas you’re working towards. Even in a longer document with a rigid structure like a white paper, you should still be introducing smaller ideas that will grow into something larger over time asa early and as often as you can. They don’t have to pay off right away, but focusing on intellectual setups and payoffs like this will allow your work to feel like you’re actually building towards something. It’ll also create a much more satisfying experience for your reader, too.

Brevity is the Soul of Everything

Along the same lines, one of the reasons why the “Die Hard” script is so incredible is because it’s a master class in the power of brevity.

Note that this does not mean “Die Hard” is short. Far from it – it comes in at about 118 pages, which is a pretty standard length for a feature film. However, the script doesn’t have a single wasted line or moment. Even John’s annoyance at seeing that his wife has returned to using her maiden name has several layers to it. Not only is it how she is able to avoid detection for so long, but it also creates another incredible moment late in the film when the villain learns that Holly Gennaro is really Holly McClane.

The lesson from this, too, quickly becomes clear: get in and get out. The length of a piece ultimately matters less than how you use that length to your advantage. The reason why a 1,000 word blog post might feel like a chore to get through isn’t because you’re being asked to read 1,000 words – it’s because not all of those words are being used in support of the larger story you’re trying to tell.

If you practice this idea even half as well as Jeb Stuart and Steven E. DeSouza managed to, your piece could be 10,000 words and people will still find it compelling. Because every line, every statement, every idea, is ultimately in service of something far larger and more important than itself.

In the end, it’s clear that the “Die Hard” script is more than just a brilliant piece of writing – it’s a roadmap that all of us as writers should be following. Even if you’re not writing a screenplay or if you’re not working on fiction of any kind, there’s still a great deal to be learned about setups and payoffs, brevity and the advantages that a rigid structure can bring to the table when you lean into that framework as opposed to seeing it as a limitation. Shock Marketing Campaigns: Good or Bad Idea?
5 Reasons to Hire a Freelancer Rather Than a Full-Time Staffer
Why Every Writer Needs a Dog
Where to Put SEO Keywords: Stop Using the Same Keywords on Every Page
Content Marketing Trends and Why to Avoid Them
Get tips, tricks, tactics, and advice in your inbox each week
Join our FREE on-demand content strategy masterclass