Writing for Your Audience: The Art of Creatively Arranging Language 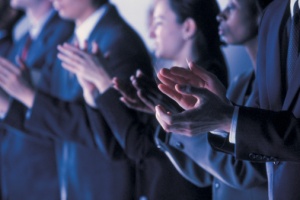 For example, if I were living in Shakespeare’s day, do you think I would walk in the room and hail everyone with a “What’s up, Dude?” Most likely not. Obviously, the parlance that is common to commoners on the show Jersey Shore or The OC would not be appropriate lingo for what was accepted speech in 17th-century England.

Indeed, words matter. How you speak affects everything you do, from the way people will treat you up to and including what your station will be in life. Therefore, it is frightfully important to know your audience. If you are speaking at a ladies’ convention on the importance of avoiding improprieties, you would not walk out on stage uttering profanities. Instead, you would probably talk in a genteel voice and stress the premier importance with which a true lady’s actions should be emulated.

Writing for your audience is the most important thing you will *ever* learn how to do as a writer. Don’t forget to make it interesting, too. If, at the end of reading this you remember nothing else, remember to write for your audience.