When Devil Babies Attack (The Marketing Gurus Come Out to Play) 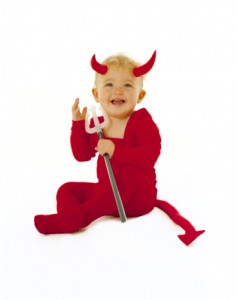 Manhattan, you’ve been warned—a devil prank baby has been loosed on your streets.

An unattended baby carriage bounces along in the cold New York weather, crying and inviting unsuspecting pedestrians to see if they can help. One look inside and they realize with a scream of terror they picked the wrong baby to check in on. Bloodshot eyes and an eerily screaming, vengeance-seeking baby pops up, terrifying the onlookers until they realize it’s all a prank.

And what a prank! A video promotion for the film Devil’s Due has captured it all—creative devil-baby prankster geniuses and terrified victims trying desperately (and hilariously) to get away.

Just like you might expect with something so entertaining, the promotional video has gone beyond viral—sporting over 30 million views since its release just five days ago. In fact, it’s been so popular that numerous offshoot videos have been made (I stopped counting at 30 copies of the original) to bask in some of the viral glory—some of them with well over 100k views.

Who are the marketing masterminds behind this prank-slash-advertisement? Thinkmodo touts itself as a “viral video marketing agency in New York” and they are responsible for the Devil Baby Attack as well as the Telekinetic Coffee Shop Surprise promo for the Carrie remake three months ago (raking in over 50 million views).

“One guy actually wet his pants,” one of the video producers told ABC News.

All in all, this movie is being predicted to take home $8 million this weekend.

Major corporations like Sony Pictures, AMC and Cosmopolitan have used Thinkmodo’s services to market their own products. I love the creativity behind their marketing and the focused intent; the painstakingly detailed realism of the devil baby was what made it most creepy and got great reactions from their victims.

What is scarier than a devilish horror film about the birth of the antichrist? This terror premiered Friday night and we fully expect the devil baby awareness to be in full swing! I know I saw this on my own Facebook feed and found the terrified New Yorkers marketing tactic hysterically funny to watch!

Alethea M is a freelance writer available on WriterAccess, a marketplace where clients and expert writers connect for assignments.