Understanding AR vs. VR and Content Strategizing for Both 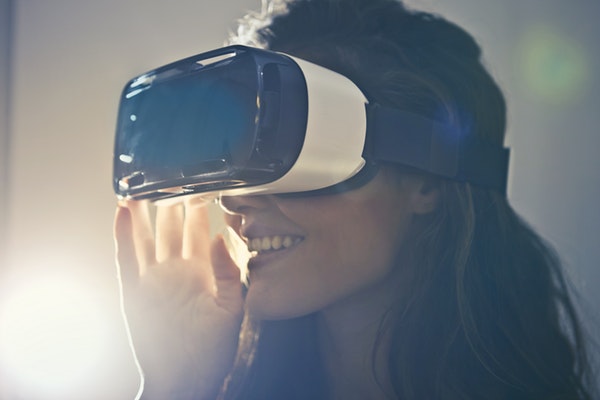 If you are stuck in the pre-altered reality marketing world like me, you might still be trying to figure out what the difference is between AR and VR and if it even matters. Interactive marketing isn’t new but it is improved through computer vision and advanced technology. I say we jump into this next generation of marketing trends together and defining AR and VR seems like a good place to start.

The Franklin Institute defines augmented reality (AR) as a way to combine digital augmentation with real-life “in your face” environments. For example, I could hold up my phone to watch my cat Nelly sleep in her favorite chair.

With AR, I might add palm trees swaying in the breeze and the ocean waves nipping at her tail to the scene. Nelly is real but everything else is manufactured via technology. Pokemon Go is the most obvious example of AR in action — they add Pokemon to your city streets and you go out and find them.

Augmented reality also lets a user point their phone at something in the real world to trigger a response.  For example, with the right setup, you could point your phone at Nelly and get details about her such as species and the fact that she is about 20 pounds overweight.

While AR takes your environment and adds the crazy to it, virtual reality (VR) creates a whole new scene and puts you into it. The Virtual Reality Society explains that VR uses sensory input to make your brain think you are alone on a desert island or walking the halls of the Louvre.

If Pokemon Go was actually a VR game, you would feel like you were in a different city chasing the Pokemon instead of your own. One combines fantasy with real life and the other creates a fantasy so realistic that you think it’s real life.

Marketing Examples of Both AR and VR

Now that I know the difference between these two cutting-edge technologies, I’m still not sure how they fit into the content marketing scheme of things. Let’s consider some examples of successful campaigns in each.

Check out this video to see augmented reality marketing in action as Coca Cola show visitors to a museum an interesting view of polar bears. In this scenario, the AR technology bought the polar bears and their environment to the museum and allowed visitors to explore that world. Through AR marketing, Coke was able to promote their brand and make people more aware of an important global concern.

The example of a virtual reality marketing video comes from the Middlebrook Retail & Leisure Park in Bolton. Notice how they add their brand name and the hashtag #holidaysarecoming to the sky. Coca Cola gets a plug here, as well, on the street sign.

Now, how can you put this newfound information to use? Here are some ways to make AR work for you:

There are a couple of things to keep in mind with AR marketing. First, make sure it will really pay off for you because it might mean making an investment. Small businesses could do better with something simpler like an interactive video ad. Also, make sure the viewer understands how to use the program, otherwise, it won’t have much value.

VR marketing is a little easier to accomplish. You can break VR down into four categories:

The first decision you have to make is which one you want to use. Next, pick a VR tool like:

Finally, whether you are dealing in AR or VR, keep in mind that your goal is not to create an ad but to manufacture an experience for your audience. This is a visual medium and you want the audience to be wowed by what they see.

AR or VR, it’s not really even a question. Mess around with both and see what you can put together. This is fun technology that you can have fun using on your next campaign.

Darla F. is a full-time freelance writer published internationally, an award-winning author and professional artist. Over the last decade, she has ghostwritten memoirs for a successful entrepreneur and created byline pieces for USAToday, Jillian Michaels, USARiseUP, New York Times — About.com, Multibrief, MedCity News, LiveStrong and AOL. Darla is known for her ability to take complex topics and make them clear to anyone.

Does Inbound Marketing Work Anymore?
Words We Hate, and Why
How an eBook Works as a Marketing Conversion Tool
Content Marketing Examples that Lose Consumer Trust (and the Fixes)
Making Thought Leadership Funny and Profound
Get tips, tricks, tactics, and advice in your inbox each week
Join our FREE on-demand content strategy masterclass