Tales From an Urban Forager, Or: A New Wave of Foodie Trends 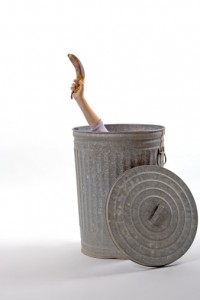 Ladies and gentlemen, foodies, gourmands, lend me your taste buds. I am your host: the Urban Forager.

I was once the head chef of a popular Korean taco food truck, but when serving drunk college kids food at 3 a.m. became too popular and the city of __________ started charging Michelin Star prices for parking, we (Artisan Al, the Dishwasher Kid, the Epicurean blog writers, and myself) decided to turn the Korean taco truck into a Merry Pranksters-style RV. Now we travel from city to city, farm to table, reporting on the latest trends in foodie culture.

Specialty cupcakes may be a national obsession, but New Yorkers are crazy for Cronuts. Pastry chef Dominique Ansel created these Frankenstein treats, which are croissant/doughnut hybrids filled with cream. Cronut mania is sweeping the land, and here’s proof.

It’s five in the morning, and the line at Dominique Ansel’s bakery in New York is 70 people deep. A woman just slipped $50 to a shady looking third-tier line cook selling black market Cronuts out of a crumpled Dunkin’ Donuts bag.

The hippie barristers at the bicycle cafe wouldn’t even let us park out front of the bistro in our Merry Pranksters RV because it doesn’t run on vegetable oil or biodiesel or whatever hippies are fueling their cars with these days. Oh, that’s right—they don’t have cars; they have bicycles. Like the Cronut, the bicycle cafe is another entrepreneurial foodie hybrid. Part bicycle repair shop, part bistro—some serve high-end coffee, while others opt for a selection of craft beers—these places are popping up all over Europe.

In order to get the Kale soup and a Belgian Slag Pils, poor Artisan Al had to rent a bike and trash the front rim by attempting to Bunny Hop a two-foot high curb. He didn’t make it, and that was the point. Only with a busted bike in tow (and a broken toe) was Artisan Al able to get a draft beer and a light lunch.

Joking, of course. The Urban Forager and his crew love hippies, bicycles, cafes, and green living.

While night markets have been fixtures in Asia since the dawn of time, these trendy gatherings are like raves for foodies in America. Night markets have an illicit, under the radar vibe, so it’s difficult to tell if people really like the bacon-wrapped mochi that is being peddled by vendors, or the fact night markets give them a criminally hip buzz without ever having to go full criminal and steal a bacon-wrapped mochi food cart.

The At Night Market in Philadelphia is a popular haunt with the foodie set. The Yamashiro Farmers’ Market in L.A. is more of a fair than a traditional market, albeit without a Ferris Wheel or Tilt-A-Whirl, which is probably a good thing—stomach wise—if you’re anything like the Urban Forager when you go to a night market and enjoy gobbling bags of homemade Jack Daniels flavored caramel corn.

Try This Clever Content Scoring System to Find the Winning Topics
What to Track When Evaluating Content Performance
What to Track When Evaluating Content Performance
Agency Hack 3 of 5: Get the Timesavers in Place, like Wizards and Builders
How to Create Content that’s Distribution-Ready for Multiple Channels
Get tips, tricks, tactics, and advice in your inbox each week
Join our FREE on-demand content strategy masterclass