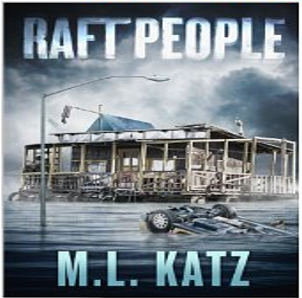 WA: When did you know you wanted to be an author, and how did you hone your skills?

Marilyn: I’m sure I wanted to be an author since I was in grade school, but I didn’t seriously try until I was already an adult who had been working in other industries for 20 years. I wrote. I watched grammar videos on YouTube and combed sites like Purdue OWL to refresh my memory about the basics. I read a lot.

I think the most important thing about writing is having a story in your head, but if you can’t stick a comma in the right place or organize your thoughts, people who can won’t take you seriously. A few will enjoy pointing it out in pretty public places.

Raft People is well over 100,000 words, and even by the final version, a few errors got past me and three very qualified proofreaders and editors. When you get caught up in the story, it’s easy to miss things. There are readers who catch those. Some will email you politely, and some will make an issue out of them on your reviews. You just have to do your best, accept criticism for what it is worth, and move on.

For any writers who are afraid to publish because you are concerned that your product won’t be 100 percent perfect, I’d like to say that perfection is subjective. You might be holding back something that is very good while waiting for it to be perfect. Also, digital publishing makes it pretty easy to fix a typo.

WA: For the creation of Raft People, how did you draw on your personal experiences living in a disaster area?

Marilyn: Part of the inspiration was living through Hurricane Ike. The storm was scary. It was the several days after the storm, when my kids and I had to function without power, ice, and open grocery stores and gas stations that really affected me. Nobody expected it to take so long to just get basic services back online. My kids and I would sit around the battery radio and laugh at all the emergency phone numbers because cell phones and land lines didn’t work, and of course, we had no Internet.

However, it was also a magical time. Without the distraction of video games, we talked and organized these crazy pot lucks with neighbors to use up food that would spoil because our ice had all melted. In a strange way, taking away everything we had taken for granted our entire lives made us nicer. It was like the whole neighborhood was together on this big camping trip, but we were still in our houses.

WA: Readers have said in regards to your book, “…the author tells the story with a voice of realism that will capture your attention almost from the first paragraph.” What advice would you give to writers struggling to come up with a gripping, page turning introduction to a literary piece?

Marilyn: You know, the preface to the book was the part I rewrote more than any other. Also, it is the part of the book that drew the most critiques from editors and readers. I think I just needed to write it first to establish plot direction, voice, and the character’s personalities in my mind, so that’s how it had to get done.

For others, I’d suggest reviewing books that grabbed your attention and trying to emulate some of those qualities. But yeah, I’d say that the first few pages are the hardest.

WA: A good book leaves a reader emotionally connected to a specific character. Which character in Raft People most resembles you, and why?

Marilyn: Everybody who knows me thinks Leah is me, and that’s why my mom says she hates a certain part of the book. I can’t say more because that would be a spoiler.

WA: You mention Stephen Baxter’s Flood and Ark books as inspiration. What about his books inspired you to write?

Marilyn: Those books were also about a big flood, and Mr. Baxter also developed the apocalypse as something that occurred over time and people really didn’t react to at first. That seems really realistic to me because it took a long time for our government to actually agree that we are experiencing climate change and that it is mostly manmade. A lot of cities will be flooded in 100 years, but nobody’s really talking about it…yet.

WA: How do you combat the dreaded writers block? Under what conditions do you feel are most beneficial for writing?

Marilyn: My tactic is to force myself through the first draft as fast as possible. That’s when the story sort of tells itself. I go back and polish and proofread for the first and second drafts. By the time that the story goes through beta readers and editors, it may be very different.

For me, getting that first draft out is the hardest part, and in my opinion, it should be done as fast as possible to avoid the temptation to give up. I use the first draft as my outline. Some authors are like me, and some will map every detail out before they begin. The right way to do it is to find the way that keeps you from giving up.

WA: Since the success of Raft People, do you have any big changes coming to your blog? What other industries do you enjoy writing about besides apocalyptic fiction?

Marilyn: Why, I do have a blog at RaftPeople.com. Thanks for bringing it up! Raft People’s publisher, Permuted Press, has also recently released the sequel called Floaters and my new science fiction novel called The Information Thieves. These are mentioned on the blog.

As far as non-fiction, my favorite projects have been a series of climate change, green, and environmental articles I was lucky enough to get paid to do. I also enjoy writing about self-publishing, traditional publishing, popular health topics, popular science, blogging, technology, finance, and just about anything to do with the Internet where I spend way too much time.