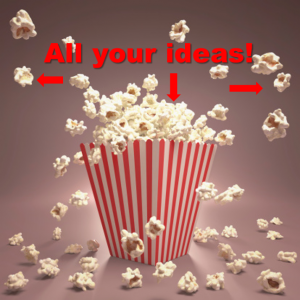 There’s another side to creativity that not many people talk about. Where most people fear writer’s block and want to know how to generate better ideas, some of us article writers are so overwhelmed with ideas it’s hard to decide which to dive into. My writing drawer is full of them, and not just for articles, but also books. How does one deal with too many ideas?

The attached article has nine ideas for dealing with ideas, some of which would generate more ideas for me, but might help you organize them better. Following these are techniques of my own:

Here are two of my own:

Try these all and see which works for you.

Susette H is a sustainability writer with many ideas, some of which she can express through Writer Access. She can’t wait for the day that more “green” companies start hiring writers here.