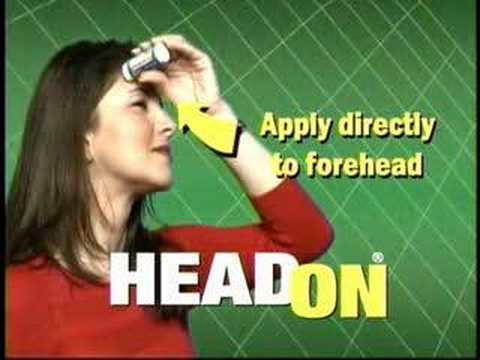 Not every marketing plan will take your business from the mom-and-pop level to Fortune 500 success overnight, but a good marketing strategy will let you grow your enterprise gradually. Bad marketing tactics, on the other hand, have been known to bring major corporations to their knees. Learn from some of the most spectacular marketing failures of all time, so that you don’t make the same mistakes!

The HeadOn commercials were certainly unforgettable, and that was about the only thing the marketing team got right. The insanely repetitive slogan caught the attention of consumers everywhere. After that, the seemingly happy woman rubbing goo on her head for no apparent reason really didn’t tell anyone anything about the product – but if you wanted to rub mysterious goo on your forehead, you could buy it at Walgreens.

The moral of the HeadOn disaster is this: repetition and catchy slogans will make consumers ask questions, but nobody’s buying if you don’t provide real, credible information about the product. As it turns out, HeadOn was made of wax with trace amounts of toxins and known carcinogens. Since credibility was out, gimmicks were the only tool they had.

Thanks webOS, Now I’m Afraid of My Phone

The commercials for the Palm Pre are a great example of how to miss your target audience by a mile. I’ll be honest – I had a Palm Pre and it was really great. The commercials though? They left me reaching for my tinfoil hat. Watch the “Read My Mind,” “Flow” and “Deja Vu” commercials to see what I mean.

You see, average smartphone users aren’t weirdly transcendent girls that expect their phones to be omniscient beings. They don’t frolic in verdant fields, pondering the mysteries of life while a hundred identical men dance around a rock. Real smartphone users do mundane things, like send texts, check their email, and play games while they wait in the checkout line.

As you put together your marketing plan, think about the end user — their likes, dislikes, the things they do every day, and how these relate to the fun and practical uses of your product. Take your inspiration from those, instead of heading straight for oddly philosophical territory.

If you’re SanDisk, and you’re trying to sell your MP3 players to Apple’s customers, do you:

SanDisk decided that insults were a great way to win the hearts of iPod users, as shown by the iDon’t campaign, wherein they likened Apple fans to sheep, chimps, and donkeys. You can see some of the graphics and outrage the campaign sparked here and here.

A little humor here and there is a great way to relate with your audience. Take a rueful approach, describe funny things your product can do, or be melodramatic in an amusing way. Don’t be mean, unless you want to make your target audience mad enough to keep buying iPods.

Amber K enjoys writing about home improvement, gardening, and the great outdoors. When she’s not sitting in front of a computer, she can be found developing strategies to conquer the world -– or at least her own little piece of it!