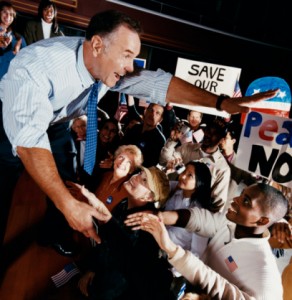 It was never more clear to me just how smooth politicians can be until my second interview with former President George W. Bush as he campaigned for a second term as governor of Texas. I was standing in an airport receiving line holding a pen and paper, and had no press identification. As if we were old friends Bush reached out for a handshake and said, “Hey, Rhonda, how ya’ doin?” He had me at “Hey.” After that, every word he said I took as gospel. I had interviewed Bush four months earlier and the idea that he remembered my name astonished me. I later realized that he didn’t remember me, but rather was a polished politician who did his job exceptionally well.

Looking back at other politicians I interviewed, including Texas Governor Ann Richards, Senator Kay Bailey Hutchinson, First Lady Laura Bush, and presidential candidate Ross Perot, I realized they were equally polished at public relations. That was part of their job. Part of mine as a writer was to remain on my toes, be skeptical, double-check every detail, and not simply write what they said.

Reporting or blogging politics is different from any other type of writing. Writing about politics requires a high ethical standard of writing unbiased, factual information with a heaping spoonful of caution not to sway the reader with your opinion. Writing it any other way falls into those old categories of yellow journalism and muckraking.

Good professional writers, bloggers, or content writers are baptized by fire in journalism gospel – credibility, unbiased writing and ethics. While citizen journalism on the Internet remains widely unregulated, a writer will never gain credibility without adhering to a strict code of ethics. Being too subjective, haphazard or amateurish in your writing will never gain reader respect and could land you in the middle of legal problems. Writing politics is a subject where defamation can easily rear its ugly head.

The written word is powerful. That was evident in 1974 when the Washington Post published a series of articles uncovering government corruption that played a part in the resignation of President Richard Nixon. While many argue that the Watergate articles written by Bob Woodward and Carl Bernstein were carefully timed by the government, the facts may not have come to light if the writers had not questioned the activities of those involved.

It is up to every writer not only to present information, but also to question it. Ask politicians direct questions that require explanations as responses. If you quote them, make sure the quotes are exact. Political candidates also record their comments. Do your research and always be prepared for the unexpected. Do not name minors without permission, and make sure what you write is factual and ethical, not scandalous just to drive up reader count. Make sure you represent balanced opinions in your writing. In other words, write both sides of a story, never pulling quotes out of context to sway the reader’s opinion.

Writing politics has changed in the 40 years since Watergate, and its impact remains unsurpassed. Today, the Internet provides a platform that politicians rely heavily upon. Bernstein says he believes Watergate’s impact has worn off some writers who have swapped good political writing for career glamor. “While great journalism was always the exception not the rule, the economics of the business is now the bottom line instead of the best obtainable version of the truth.”

Doing the necessary research while questioning the facts remain tools of the trade for all professional writers. Many events have shaped the charter and inspiration for writing about politics. Developing your own charter for quality writing will increase your ability to see not just what kind of writer you have become, but what kind you have yet to be.

RHONDA D is a freelance writer available on WriterAccess, a marketplace where clients and expert writers connect for assignments.